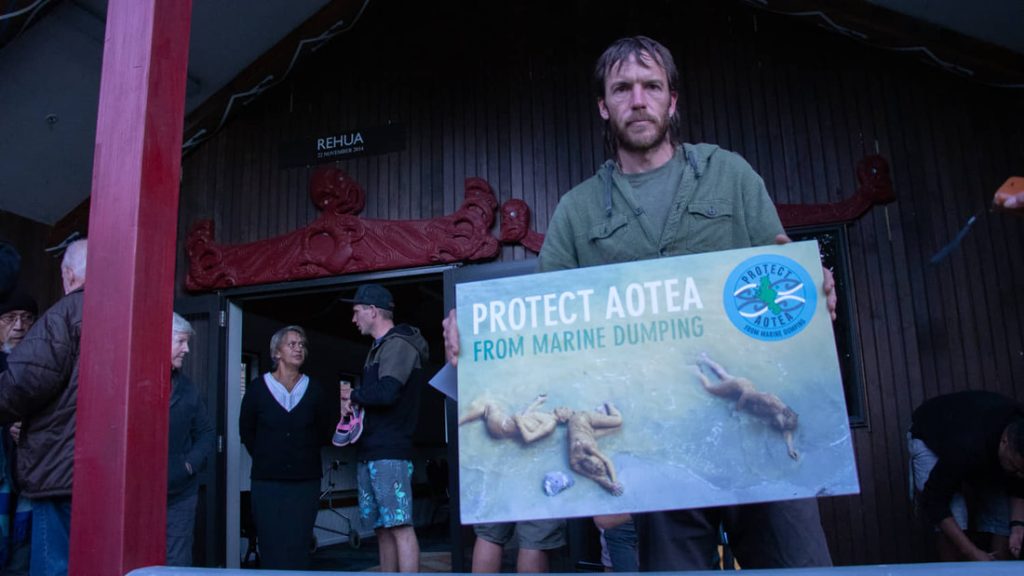 Ngāti Rehua Ngātiwai ki Aotea whānau, led by Kelly Klink and Valamine Toki, have been working tirelessly along with many members of the wider Great Barrier Island community for many months fighting the Environmental Court’s decision to allow the increased dumping.

Kelly says, “We are holding a protest march on Saturday, 6th July.”

“We will gather at Takutai Square in Britomart at 11:30am.  We will have some speeches to inform the public of the consent that has been granted and the impact this will have on our environment.  We will then have an opportunity for open mic time, for others to share their thoughts.”

Niuean New Zealand activist, Polynesian Panther and Roots Reggae Musician, Tigilau Ness has generously offered to perform and support the protest. The Protect Aotea, Great Barrier Island, Society is grateful to Tigilau for his support and know that he does this because he too feels so passionate about protecting the environment from this toxic sludge in our waters.

Kelly says, “The Auckland Harbour is being dredged to allow for bigger boats and is also partly due to dredging work needed for the America’s Cup that New Zealand is hosting.  But all this is coming at the cost of dumping this paru sludge into the pristine waters of Aotea, Great Barrier Island.”

“We are marching because we do not want this to happen, and we ask all our Ngātiwai whānau whānui who are able, to join us to oppose the Environment Protect Authority’s decision to grant this terrible consent to Coastal Resources Ltd.”

Social media has raised the awareness of the proposed dumping, with a petition ”Stop the dumping of toxic dredge sludge close to New Zealand’s Aotea/Great Barrier Island”, currently sitting at 12,600 signatures.

Previous
Next
The Ngātiwai Trust Board support the stand being made by whānau and the wider community of Aotea, Great Barrier Island to protect the island eco system in the moana.

Ngātiwai Trust Board Chairman, Haydn Edmonds says, “Our indigenous foot print and contiguous ownship on Aotea qualify us to take this stand, the Environment Court’s decision with the support of the Government of this country, continue to erode the rights of our whānau in the Southernmost Boundary of our Ngātiwai Rohe.

Our whānau of Aotea have been on the island for generations.  We absolutely support their opposition to EPA’s decision to grant a larger dumping consent. The Environment Court must reconsider the land based dumping options for disposing of this sludge, the effect on the moana is changing the environs.”

Whānau from our Northern hapū and whānau are mobilising to tautoko the protest on the 6th July in Tamaki, and we will be supporting the whānau to attend.”

In March this year, Kelly Klink of iwi Ngāti Rehua-Ngātiwai ki Aotea and the Society for the Protection of Aotea Community & Ecology lodged appeals in the High Court against an Environment Protection Authority decision.

Kelly says, “This has really brought the community of Aotea, Great Barrier Island together, that we are one people, Māori and Pākehā, fighting the injustices that are going to be happening in our area.”
The appeal has been approved, with a High Court hearing date being set for 22nd and 23rd July 2019.
In her appeal to the High Court Kelly says that the Environment Protection Agency failed to consult the iwi before allowing up to 250,000 cubic metres of sludge from Auckland Harbour to be dumped every year for 35 years.

Kelly says, “There was no proper inquiry into likely environmental damage of dumping on the iwi\’s traditional hāpuka grounds.”

\”It\’s also where the Pacific warm waters come through so all the fish are coming through this area. Our people have been fishing that area and those waters for generations and our tūpuna who spilt blood to look after that moana.  So clearly we are up in arms they that have disregarded and totally ignored our concerns and on Saturday, 6th July we will march to Aotea Square, the name of our taonga tuturu.”

With the guidance and tautoko from the kaumatua and kuia of Ngati Rehua Ngatiwai ki Aotea, a resolution was passed on Saturday, 22nd June at Motairehe marae.

The rāhui was placed in response to the detrimental impact the dumping of marine waste has and will have on our wāhi tapu grounds, in particular, our taonga hāpuka. Ngāti Rehua Ngātiwai ki Aotea whānau have been fishing these areas mai rānō for centuries, and have maintained kaitiakitanga of Te Moananui o Toi te Huatahi. This dumping will have a huge impact on other marine species and will have a negative flow on effect throughout the motu.

The rāhui will be in place until the kaumātua and kuia of Ngāti Rehua Ngātiwai ki Aotea decide that the moana will be sufficiently protected and the mauri and the mana restored.